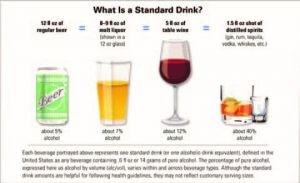 The Female Factor: Alcohol is Not Gender-aNeutral

Given the growing popularity of the cocktail culture and wine time, it’s important to know that alcohol affects women very differently than men – physiologically, psychologically and socially. It’s worth asking: For women, is the wine glass half full or half empty when considering the risk-versus-benefit ratio?

First, there is the difference in women’s body composition. Women have more total body fat and less total body water than men. As a result, alcohol is less dispersed, resulting in a higher blood alcohol level, drink for drink, than in men. Metabolism also plays a role, as women produce less of the alcohol dehydrogenase (ADH) enzyme that controls the rate at which alcohol is broken down in the body. This means a blood alcohol level that rises more quickly in women and stays elevated longer. Women are more vulnerable than men to alcohol’s effects on other levels too: more likely to black out from drinking, to suffer from mood and behavioral changes and to more rapidly develop an addiction. Women may also experience higher rates of depression and anxiety, often drinking in response to negative emotions and problems with loved ones versus men’s tendency to drink for positive reinforcement and pleasure.

All these factors make the record high drinking rates for women a real cause for concern. Problem drinking rose by 83% among women from 2002 to 2013, rapidly closing – in a most unfortunate way – a gender gap that has existed for decades. Current statistics show that 5.4 million women over 18 may be considered as having alcohol use disorder (AUD) and need treatment. However, gender plays a role here too, as women who consistently seek treatment for almost every other physical and mental health problem at higher rates than men are far less likely to do so for alcohol-related problems. Less than 1 in 10 women get formal help, hindered by the stigma of addiction and feelings of guilt or shame in not being able to function as caregiver for their family.

Alcohol’s impact on other disease is mixed. There is evidence that one drink a day may reduce women’s risk of heart attack, cardiovascular disease and the most common type of stroke. The risk of breast cancer, however, increases by 5 – 9% and rises with each additional drink per day. It’s worth noting that taking a multivitamin fortified with 400 mcg of folic acid daily may lower some of women’s elevated risk from alcohol, according to recent studies.

The best advice, as with most of life’s issues, is moderation. Avoid alcohol if pregnant or if you have a personal or family history of breast cancer, liver disease or alcohol abuse. Otherwise, consuming one drink a day is generally healthy, so be knowledgeable about how to measure that (see below) and enjoy a glass with friends or at special events. Don’t try to match the pace of male celebrants, especially if they’re over-imbibing. In fact, gently steering them away from the bar and onto the dance floor may be the healthiest move for all.

Alcohol use disorder is characterized by symptoms such as:
· excessive time spent drinking
· needing to drink more to get the same effect
· wanting a drink so badly you can’t think of anything else
· inability to stop drinking despite the impact on work and family
*Source: National Institute on Alcohol Abuse and Alcoholism

The post Alcohol: Not Gender-Neutral appeared first on Specialdocs Consultants.

Bring It Down: Healthy Blood Pressure Numbers May Go Even Lower

How Much Vitamin D Do We Really Need?